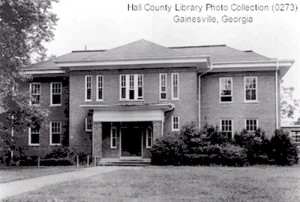 One hundred years ago, the Don Carter Realty Co. building was constructed. At the time, it wasn’t office space. It was Candler Street School.

In 1910, Gainesville purchased a lot on Candler Street from H.H. Dean to build a school to help handle population growth on Green Street and its side streets, according to documents from Don Carter Realty. The lot was only 95 feet by 250 feet, but by 1911 Candler Street School was standing. The building only had one major renovation, an expansion in the 1940s on land bought in 1937.

The school’s playground was put on land adjacent to the original lot.

“They had a great playground there,” said Paula Sawyer, a former Candler Street student. “It was three levels. You had one level that had swings and a slide, a merry-go-round and a big area to run and play tag. They had another level with monkey bars and equipment and a lower level, which I guess now is one of City Park’s ballfields, which was a huge place for team sports.”

Sawyer, now a nurse at Gainesville High School, attended Candler Street starting in 1966 as a first-grade student. She and a group of friends lived close enough to walk there and back every day.

“We would cut through the back of the Campfire Girls cabin, just through the woods,” said Margaret Henson, whose family owns Martin Furniture. “It was so safe then and Gainesville was such a small town. A whole group of our little girlfriends just walked to school.”

Henson’s favorite memories of the school also include the playground.

“My sister actually fell off the monkey bars when she was in second grade and broke her hip right on the playground. She knew she was hurt but she didn’t want to tell anybody,” she said.

Henson’s sister walked home from school and it wasn’t until the next day, when she refused to get up out of her seat, that anyone realized she was injured.

Back in the 1960s, education had some notable differences than today’s classroom.

“When I was in first or second grade, we had a classmate who wouldn’t stay in her seat. She kept getting up and after many attempts by the teacher to direct her to stay seated and she didn’t, the teacher got out a rope. She sat the student in her desk and tied the rope around it to keep her seated,” Sawyer said. “Teachers were allowed to paddle students that misbehaved … and you didn’t ever want to get sent to the principal’s office.”

That sort of corporal punishment didn’t seem wrong or harmful, but Sawyer doubts it would be tolerated now.

She also remembers that until fifth grade, she and the other girls at Candler Street had to wear skirts or dresses every day.

It was not until the early 1970s that pants was appropriate classroom attire for girls.

The first black teacher at Candler Street was a woman named Ms. David. Henson was in her class.

“She didn’t stay but about two weeks. I guess things were just really bad for her,” Henson said. “I always remember thinking, ‘Why did she leave?’ I think there were some bad children who said ugly things, and they were tolerated.”
Having black children at the school didn’t elicit the same reaction later on, after Candler Street was integrated.

“I believe I was in fourth grade when that happened. I do remember that was the first time I had seen buses come up to the schools — you either walked or were a car rider,” Sawyer said. “The buses came up the first day of integration and the kids got off, and they might have been a little uncomfortable, but to us it was just a regular school day.”

There were lots of good things to remember about Candler Street for its alumni — Halloween carnivals with all parents and classes participating, the basement cafeteria and the Greenies, which Sawyer said was the name of the school’s football team for Parks & Recreation.

“It just had an unusually fine group of children and their parents. That’s the outstanding thing about the school,” said Francis Haynes. “They went all-out to make it the best.”

Haynes taught at Candler Street for 12 years and then served as principal from 1954 through 1963.

“I don’t think it should have closed,” she said. “They built Enota School because Candler was too run over with students. With Enota, so many people started building up there that it became a real large school too.”

The first of the original schools that closed was Miller Park, followed by Main Street, Haynes said. Candler Street was next on the list, closed in 1978 when there weren’t enough students to fill the building.

“The population just increased in Gainesville that they had to keep doing something,” Haynes said. “They thought rather than add to the old building it would be better to build new schools.”

BatesCarter has a depth of knowledge that many accounting firms cannot match. From taxation and advisory to audit and assurance we have purposefully structured our business to ensure that each client receives the attention of our firm's partners no matter what the need is.

Our office is located in Gainesville, Georgia although our service area extends beyond Gainesville into Atlanta and throughout the state.