Candler Street School was built in 1911, a time when the northern portions of the Gainesville community were developing. Gainesville was chartered in 1821 as the county seat of hall County which was founded in 1818. The earliest building activity occurred in the vicinity of the central business district. The Atlanta-Charlotte Airline Railroad was established in the 1870's. The depot was located to the south of the central business district so growth occurred in this area. Eventually, this growth developed into industries which made this section of town less desirable for residential neighborhoods. Residential growth began to occur in the areas to the north. Green Street was one of the first such areas. This route, lined with Victorian and Neo-Classical style homes, was easily accessible to the business district by the street car line. Growth soon followed on the side streets of Green Street which included Candler Street. With this growth came the need for a school in this section of the community. 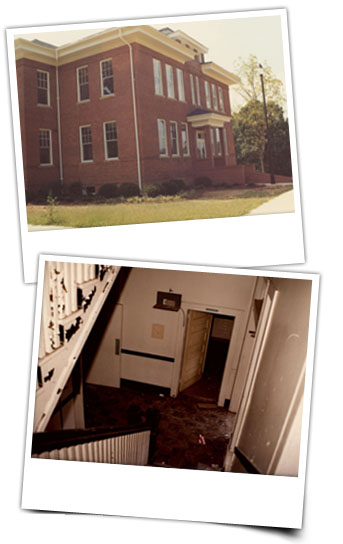 In 1910, the City of Gainesville purchased a lot on Candler Street for the location of the school. The lot was purchased from H.H. Dean and was known as the U.R. Waterman place. The lot measured 95 feet fronting on Candler Street by 250 feet. A house which had apparently been rented by Waterman was demolished in the consturction of the school. The structure was designed by the Cunningham Brother of Greenville, South Carolina and built by Loden and Prater of Gainesville, Georgia. The structure was large for the limited site of the lot. It appears that the building covered almost the entire width of the lot with approximately ten feet remaining on the east and west sides of the building. Playground space was apparently provided to the rear of the structure on adjoining land. The building became an elementary school, a use continued until it was vacated in June 1978.

In 1937 the City of Gainesville purchased additional property to the east of the building. This additional acreage was used for classroom space which was added to the structure in 1947. Additional city lots were purchased during the 1960's and 1970's. These acquisitions expanded the frontage on Candler Street. Sturctures which had been located on these lots were demolished with the exception of a modest Bungalow-styled residence located southeast of the school. With subdivision growth in the outlying areas, it appears that the number of elementary school age children decreased in the central city so the school was closed in 1978.

In 1981, the building was purchased from the city of Gainesville by Don Carter. Mr. Carter and his partners John Carter and Jim Bates of Bates and Carter, CPA, restored the building and developed it into office suites.

Candler Street School was listed in the national register of Historic places in November of 1982. It was occupied by BatesCarter, the Don Carter Realty Company, Benton & Parker Insurance, Nath Hayes insurance, Gerald Cresap A.T.A., and the Junior Service League of Gainesville.

The restoration has received the Georgia Trust for Historic Preservation Award.

In 2015, the building is occupied by BatesCarter & Co., LLP, Don Carter Realty Company and Woodmen of the World.

BatesCarter has a depth of knowledge that many accounting firms cannot match. From taxation and advisory to audit and assurance we have purposefully structured our business to ensure that each client receives the attention of our firm's partners no matter what the need is.

Our office is located in Gainesville, Georgia although our service area extends beyond Gainesville into Atlanta and throughout the state.